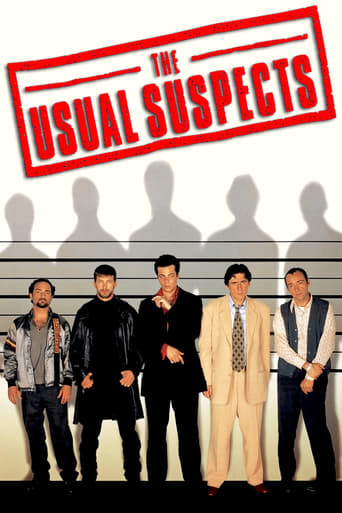 Held in an L.A. interrogation room, Verbal Kint attempts to convince the feds that a mythic crime lord, Keyser Soze, not only exists, but was also responsible for drawing him and his four partners into a multi-million dollar heist that ended with an explosion in San Pedro harbor – leaving few survivors. Verbal lures his interrogators with an incredible story of the crime lord's almost supernatural prowess.

Following a truck hijack in New York, five conmen are arrested and brought together for questioning. As none of them are guilty, they plan a revenge operation against the police. The operation goes well, but then the influence of a legendary mastermind criminal called Keyser Söze is felt. It becomes clear that each one of them has wronged Söze at some point and must pay back now. The payback job leaves 27 men dead in a boat explosion, but the real question arises now: Who actually is Keyser Söze?

Great movie with superb performance from Kevin Spacey, well accompanied with the rest of the cast.

Keaton always said, "I don't believe in God, but I'm afraid of him." Well I believe in God, and the only thing that scares me is Keyser Soze. The Usual Suspects is directed by Bryan Singer and written by Christopher McQuarrie. It stars Gabriel Byrne, Kevin Spacey, Kevin Pollack, Stephen Baldwin, Benicio Del Toro, Chazz Palminteri, Pete Postlethwaite, Giancarlo Esposito and Dan Hedaya. Music is by John Ottman and cinematography by Newton Thomas Sigel. Held in an L.A. interrogation room, Verbal Kint (Spacey) attempts to convince the feds that a mythic crime lord, Keyser Soze, not only exists, but was also responsible for drawing him and his four partners into a multi-million dollar heist that ended with an explosion in San Pedro harbor – leaving few survivors. It sort of sidled into movie theatres in 1995 with no fanfare or heralded notices. Yet it wasn't long before word of mouth got around that The Usual Suspects might actually be the must see film of the year. Fledgeling director and writer - Singer and McQuarrie - produce a masterclass of crime/mystery/noir plotting in a whirl of intricate plot shifts and deft sleights of hand. The core essence of the story is simple, just who is Keyser Soze? His reputation is one of utter fear, he may even be the devil himself. What transpires throughout the film is a number of scenes told in flashback form and narrated by Kint as the cops put the heat on him. We are introduced to the five criminals who make up the suspects of the title, where dialogue pings with machismo laced humour. The addition of Postlethwaite's Kobayashi character, one of Soze's harbinger's of doom, further ups the ante of the story's deliciously corkscrew intrigue. It all builds to a climax that - has you pondering just what you have watched previously. Yet here's the key as to why the pic still holds up on repeat viewings, we have been outsmarted, for as we dive in and enjoy the across the board great perfs, we have been privy to something that will stand the test of time for the genre it sits in. The repeat viewings factor still, some decades later, is as strong as ever. The advent of time and home format releases etc have only improved the pic's own mythical status. Behind the scenes egos and dislikes on set only add further strength to the characterisations, as does one main man thinking he himself must be Soze when in fact he was way off. There's a trail of clues in the film that will reveal who Soze is - who knew!? - and on it goes. The Usual Suspects is the filmic gift that keeps on giving. 10/10

"The Usual Suspects" is a good movie to watch once but an even better movie to watch a second time. This low-budget film from the 90's has won two Oscars and is considered one of the all-time greats by many movie lovers. "The Usual Suspects", directed by Brian Singer, is not a super flashy movie with pretty girls and crazy good camera angles, but it's a well thought out thriller that leaves you with your jaw on the floor when it finishes. The movie is about five criminals that get pulled in by the cops on a bogus charge. When they are released they decide to get a little bit of revenge on the police department but end up getting tied up with one of the World's most dangerous criminal masterminds, Keyser Soze, who turns out to be one of the criminals the police originally picked up. The movie has a high quality script, beautifully-acted characters, and one of the greatest endings a viewer could ever want, but the thing that really sets this movie apart from the others is the subtle details of the script the director put into it. After watching it for the first time I was confused and really wanted to watch it again, but after a second time watching it, I really got an appreciation of all the little hints at the ending that the director put in it. Things that you didn't even think were important actually gave away the entire twist at the end. Another thing that this movie does really well is keep the audience engaged the whole time. It starts off a little slow while it develops the characters, but right as it gets to be too slow the movie throws something exciting at you. It is a true thriller that keeps you entertained the whole movie but on the edge of your seat for the last half of it. A great cast, a very well thought out script, top-notch directing, and a twist at the end that will leave you wanting to watch the whole movie again, "The Usual Suspects" has pretty much everything that a movie viewer could want.

Who knew that the weakest of the group was actually the strongest? A crippled man among great criminals? The revealing of the facts and also the plot twist was amazing. And it would be a nice lesson for life. The way Keyser told and twisted the story himself to the police officers, he was God damn slick. Like what Keyser himself told us, the greatest trick the devil ever put is convincing the world he didn't exist.

The Usual Suspects is a secret romantic movie, mostly for men.

This film is basically a dark, sophisticated 'caper' thriller with the added twist that the main characters are rapidly awakened to the fact that they are being ruthlessly manipulated behind the scenes. The deeper they go, the more intense the experience. While none of these guys are admirable (in fact they are all clearly trash), you can't help but feel for them. They are just so in over their heads. And the puppeteer bad guy is a nightmare.Unfortunately I guessed its 'big secret' almost as soon as I knew there was one, and am justly disappointed. It was nice to keep getting confirmation as it went along, but I would like to have experienced the final surprise. (And I am sure I'm not singular in guessing the ending.)This film really relies too much on the 'wow effect' to make its major impression (read other comments for confirmation)--always a clue that a work of art is leaning hard on a crutch. Take away the surprise ending, and what do you have? In this case a stylish and well-produced film with a gaping hole. For example, compare it to LA Confidential. Even if you had guessed LAs secret before they let it out, it wouldn't spoil a thing--because that film didn't rely on a plot twist for its primary punch. It had a whole basket full of assets.I'd give this movie a 7 if its secret had been better (and more creatively) guarded. As it stands, I give it a 6 for the excellence of the entire production and that fact that I was fairly well entertained. But I won't be watching it again, whereas LA Confidential will always be on my list.********ABSOLUTE SPOILER *************** Agatha Christie first introduced this gimmick in 1926 with The Murder of Roger Ackroyd. Beyond that, the whole gig follows the classic mystery formula right down the line: Once we realize it's a whodunit (its clearly gotta be somebody we met, otherwise no punch), the obvious choice is the 'least likely one.' And there he is, perfectly disguised to fool you into not even looking his way--a good indication you should look his way. Another giveaway is that we have one guy telling the story and everything we see is from his eyes. Makes you wonder: 1) Why did only this guy survive? 2) Who says we are seeing the truth, except him? And the big one: 3) I'm supposed to believe a con artist? Not.