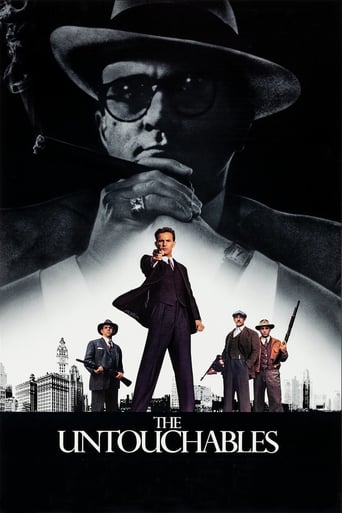 Young Treasury Agent Elliot Ness arrives in Chicago and is determined to take down Al Capone, but it's not going to be easy because Capone has the police in his pocket. Ness meets Jimmy Malone, a veteran patrolman and probably the most honorable one on the force. He asks Malone to help him get Capone, but Malone warns him that if he goes after Capone, he is going to war.

After building an empire with bootleg alcohol, legendary crime boss Al Capone rules Chicago with an iron fist. Though Prohibition agent Eliot Ness attempts to take Capone down, even his best efforts fail due to widespread corruption within the Windy City's police force. Recruiting an elite group of lawmen who won't be swayed by bribes or fear, including Irish-American cop Jimmy Malone, Ness renews his determination to bring Capone to justice.

Never stop fighting till the fight is done, here endeth the lesson. As good a gangster movie that has ever been made as DePalma does justice to Mamet's electric script. The acting on show is right out of the top draw, the inevitable ease that DeNiro puts menace into Capone is quite impressive, whilst the fresh faced pugnacious tenacity of Andy Garcia's George Stone is something of a delightful experience. Yet that is not enough because we still need the central actors to carry the film if it is going to triumph. Connery is a given performance wise (accent aside of course, but then again who cares when the character portrayal is as sharp as it is here?) but it is Costner as Eliot Ness that shines like the star he was soon to become, it's a magic performance that manages to fuse genuine tenderness of family love with little trips to the dark side in pursuit of making good triumph over evil. I love that the film is showing how violence and fear affects families, mother and child is a theme that is central to the film's heartbeat, notice how some of the more violent scenes are followed by tender scenes of Ness and his family. The set pieces here are attention grabbing entertainment, a roaring Canadian border rumpus and a smashing roof top pursuit and face off are top value, but it's DePalma gold watching a brilliant Battleship Potemkin homage at the Union train station that takes the cake as the film enters the last quarter. Surely historical facts does not matter when films are as sharp as this one is?. It's frightening, touching, and even witty. So for me at least, the film is 10/10 in every department (and yes, even with Sean's accent). Footnote: The academy saw fit to nominate Ennio Morricone for his wonderful score, yet strangely he used some of it for the main theme in John Carpenter's 1982 film "The Thing", they must have missed it that time I presume! Must be the genre angle one thinks...

If you enjoy reading my Spoiler-Free reviews, please follow my blog @ https://www.msbreviews.com Capone starring Tom Hardy is being released this week, so I decided to visit a classic from the late 80s that also features Al Capone (this time portrayed by Robert De Niro). One of my 2020's resolutions is to review older films, classics that I never wrote about, and maybe go through a director's filmography before his/her next big movie. I'll also try to review previous films inside a franchise, for example, before the live-action Mulan is released, I'll definitely rewatch and review the 1998's original. You get my point. The Untouchables is one of those classics I've already seen a few times, but I can't quite recall the last time I watched it, so it almost felt like a whole new release since I didn't remember most plot points. I really enjoyed experiencing such a great period gangster movie again. The cast is incredible, and I'll get there, but I need to start with the impressive production level for a 1987's flick. From the set design to the well-crafted action sequences, everything looks and feels like Chicago during the Prohibition Era. I love how the dialogues are played out. Nowadays, it's not that common to have an entire film filled with long, uncut conversations between the characters. Most directors just employ the unimaginative "line-cut-line" type of dialogue. I'm not the biggest fan of Brian DePalma, even though he started one of my favorite action sagas of all-time (Mission: Impossible). However, his blocking/framing skills are outstanding in this movie. Every actor's movement is followed seamlessly by the camera (DP: Stephen H. Burum), making every single shot count. The screenplay is very well-structured. Every time the film starts lacking energy, something impactful occurs. A great action scene, a new story development that changes the course of the narrative, or a character's decision that makes the viewer worried about an inevitable outcome. Consequently, The Untouchables rarely loses its momentum, it's always entertaining in some shape or form. The four characters that constitute the title group are all emotionally compelling, and their actors offer extraordinary performances... except for the lead, Kevin Costner. I don't know if people might consider this a hot take or not, but I find Costner's display extremely one-dimensional. During the movie, he goes through life-threatening situations, people that he cares about die, and he eventually gets face-to-face with Al Capone. His facial expression looks awkwardly almost identical in all of these scenes, and many more. It's his first big film, the one that catapulted him into stardom, but I'm not the first to find his acting rangeless in this flick. Nevertheless, it doesn't become that big of a distraction that I can't connect with his character. Regarding the rest of the cast, Sean Connery steals the show with his portrayal of Jim Malone. He's charming and funny, but when he needs to take his character through a very dark and dramatic scene, he has no problems in delivering an exceptional performance. The young Andy Garcia (George Stone) proves that he had the chops to become a great actor (which he did), and Charles Martin Smith is surprisingly witty as Oscar Wallace. My main issue with the movie involves the lack of screentime given to Robert De Niro as Al Capone. Sure, it's a story about the people who got the famous gangster, and not a biography of the latter. However, not only it's a waste of a phenomenal actor, but also a waste of a potentially great character. Al Capone is supposedly a quite clever businessman and ruthless crime boss, possessing an unusually well-protected organization, but he only appears in a few scattered scenes, like he's just some random villain that the good guys need to defeat. Granted, they're really cool scenes, but he doesn't feel like the massive threat that the film assumes he is since the viewer barely gets to know Al Capone and how he holds so much power. All in all, The Untouchables still holds up incredibly well after more than thirty years. Production-wise, not only the sets and costumes seamlessly resemble the Prohibition Era, but Brian DePalma's technically impressive blocking and framing are a joy to watch. Long, captivating, uncut dialogues are elevated by a remarkable cast (Sean Connery is undoubtedly the standout), despite Kevin Costner lacking a bit of emotional range. Even the action sequences of this 1987's movie look better than a lot of blockbusters of today. David Mamet writes a well-structured screenplay that rarely loses interest and featuring exceptionally compelling characters. Addictive score from Ennio Morricone as well. However, both Robert De Niro and his character, Al Capone, are underused, especially the latter. For such an important character who constantly changes the path of the narrative, the lack of screentime doesn't allow the viewer to understand Al Capone's motivations or feel how much of a threat he truly is. Still, it's a classic worthy of a rewatch, and I definitely recommend it. Rating: A-

Downloading Seeding The Untouchables (1987) from to 0 peers.
of
↘0 b/s / ↗0 b/s
Read our blog post about Streaming Torrents From Your Browser