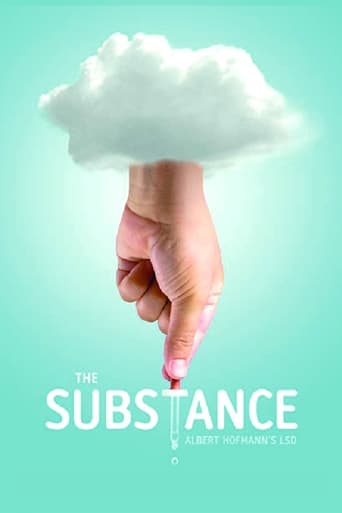 By coincidence rather than by design, the Swiss chemist Albert Hofmann makes a sensational discovery in the spring of 1943. He realizes that he is dealing with a powerful molecule that will have an impact that reaches far beyond the scientific world. THE SUBSTANCE is an investigation into our troubled relationship with LSD, told from its beginnings to today.

In 1943| the year in which the first A-bomb was built| Albert Hofmann discovered LSD| a substance that was to become an A-bomb of the mind. Fractions of amilligram are enough to turn our framework of time and space upside down. The story of a drug - its discovery in the Basel chemistry lab| the first experimentsby Albert Hofmann on himself| the 1950s experiments of the psychiatrists| the consciousness researchers| the artists. Could it actually be possible to find apath to the core of our human existence by means of a chemical? Spirituality at the flick of a switch? Do the enigmatic effects of this drug really help us tobetter understand the human soul? Could LSD be an instrument of contemporary psychiatry? Of modern brain research? Downloading Seeding The.Substance.Albert.Hoffmans.LSD.2011.GERMAN.WEBRip.x264-VXT from to 0 peers.
of
↘0 b/s / ↗0 b/s
Read our blog post about Streaming Torrents From Your Browser