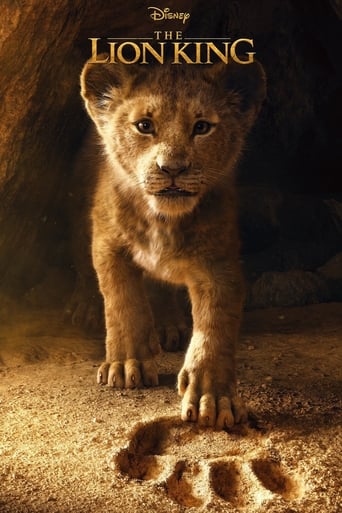 Simba idolizes his father, King Mufasa, and takes to heart his own royal destiny. But not everyone in the kingdom celebrates the new cub's arrival. Scar, Mufasa's brother—and former heir to the throne—has plans of his own. The battle for Pride Rock is ravaged with betrayal, tragedy and drama, ultimately resulting in Simba's exile. With help from a curious pair of newfound friends, Simba will have to figure out how to grow up and take back what is rightfully his.

After the murder of his father| a young lion prince flees his kingdom only to learn the true meaning of responsibility and bravery. ‘The Lion King’ is a catastrophe; a new low in the ever-diminishing returns of Disney’s endless run of remakes. There’s nothing redeeming about it, with every decision either ill-conceived or mishandled to the point of incompetence. In Favreau’s hands, ‘The Lion King’ is rendered thunderously dull, lacking in any tension or complex characterisation, taking a laboriously long time to go nowhere and never once justifying its contentious existence. Even with my dislike of the original, I was flabbergasted at how thoroughly this film never attempts to understand why so many people love the 1994 film. If nothing else, this film makes it abundantly clear that Disney has no interest in making great cinema or honouring its own legacy. They don’t care whether the film is good or whether you enjoy it. All they care about is using nostalgia to trick you into buying your ticket so they can make as much money off you as they can, and maybe if they throw some recognisable iconic moments from your childhood on the screen, they may even be able to fool you into thinking you’d had a good time. ‘The Lion King’ is the ultimate diabolical apex of the commercialisation of nostalgia, and its inevitable box office success will just prove how easily we continue to be duped and how thoroughly they have trained us to not care about the quality of what we see. If this really is the future of mainstream cinema, then we are in serious, serious trouble. - Daniel Lammin Read Daniel's full article... https://www.maketheswitch.com.au/article/review-the-lion-king-a-catastrophic-and-soulless-remake-of-a-disney-classic

Scooby Reviews. 4/5 Stars. There won't be any comparison made to the one released in the year 1994 in this review simply because this movie is in an entire different league. Spectacular direction, brilliant filming and a 3D that is wonderfully done. The animals look so nice, so real and that is the trademark of Disney's live action movies. We have already experienced Jon Favreau's The Jungle Book and now his latest offering The Lion King does not disappoint and it is here to stay. There is a reason why Disney movies are so mass appealing, that reason is "quality" and that is exactly what you get to experience. This movie emphasizes on love, struggle, envy, anger, betrayal, hope, courage, friendship and unity. The way the food chain works in the jungle is shown in a very good manner. For once you may not give this a second watch but you will never be able to deny the fact that this is a very good movie. I personally feel that this movie should have been a little more longer and i say this because the studio runtime makes it look streaked. So this is the only area of improvement i see there. Nevertheless, this movie is a Success. Brilliantly done.

**Its not as bad as Cats or Star Wars 9.** Disappointing and inconsistent. 2019 seems to be the year where the big movies were made to look good, but are in reality vapid and this is no exception. This looks good mostly (except when Simba is a "teenager" and a lack of genitals means that the animals do not look really real), but everything else is below average. Also, the "real-ness" of the animals make some scenes way more scary for children. The choices made in this are....strange. -The voice casting is weird (some African sounding, some American, and others in between) - like there was no plan. -Extra scenes and dialogue do not add to the movie and even lessen it when compared to its predecessor. -The way the songs have been re-done/ recorded are just wrong and **this is the first Zimmer score that I have not liked** in....forever (it feels like he just phoned it in). -And a baby warthog suddenly appears at the end near Pumba, but no mother...WTF? There is still a plot though, so there's that... which means its better than the shambles that was Rise of Skywalker or Cats. Yet another movie to forget.