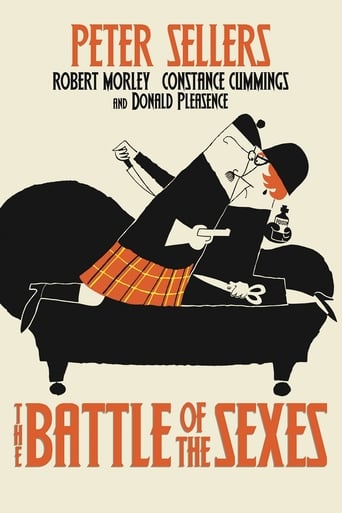 Angela Barrows is a man-eating business woman sent by her American employer to investigate their export opportunities in Edinburgh. En route she meets Robert MacPherson a businessman who asks for her help to bring his company into the 20th Century. The staff, led by Mr Martin has other ideas though, and a battle between the old and new business methods soon breaks out.

Angela Barrows| an accomplished business analyst from the US| attempts to contemporise the late MacPherson's tweed factory| shaking the very foundation of amen-only company. Downloading Seeding The.Battle.Of.The.Sexes.1960.1080p.BluRay.x265-RARBG from to 0 peers.
of
↘0 b/s / ↗0 b/s
Read our blog post about Streaming Torrents From Your Browser