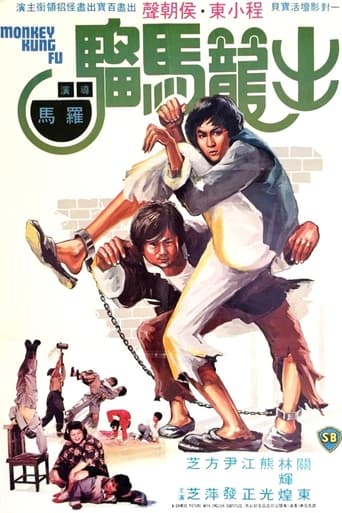 A small-time crook goes in search of the other half of a wooden keepsake which will lead him to the legendary kung fu technique of the Gibbon Clan Fist.

Ching, a small-time crook, is sent to prison. There he meets a one-eyed master who has been sentenced to death. Shortly before he is executed, he gives Ching a wooden keepsake, half of which is missing, and cryptically tells him he must search for the other half, for then he will understand. Shortly thereafter Ching breaks out of prison with another inmate and goes in quest of the missing piece to discover its secret. However, he is not the only one after it. A gang leader who also wants the piece is now on Ching's tracks. Also, the inmate with which Ching originally escaped now seems to be popping up everywhere. What secret lies behind the wooden puzzle?

Lo Mar's "Monkey Kung Fu" does not have much of a story but the action and performance by martial arts choreographer Tony Ching Siu-Tung ("House of Flying Daggers", "Chinese Ghost Story") is absolutely amazing. His athletic stunts, wireless jumps and kicks are a joy to behold. The new Shaw Brothers DVD is the best deal to watch this incredible action.However, it seems there is a little mix-up in the names and the user comments of the film. The time I'm writing this, the IMDb picture shows "Monkey Kung Fu" aka. "Monkey Fist, Floating Snake", a vastly inferior movie. But the cast refers to the Shaw film, which is also listed as "Stroke of Death" (1980) - its alternative title."Monkey Kung Fu" by Lo Mars starring Ching Siu-Tung tells of a small time crook who gets sentenced to prison. He meets a one-eyed master in the cell who gives him a mysterious object. Ching breaks out of prison with another guy and searches for the answer to the riddle which will lead him to "Gibbon Fist Clan"'s kung-fu technique.

Hearing that "Monkey Kung fu" had almost non-existent plot, I did not expect to like this one, but the fact is, this is a highly enjoyable film, thanks mainly to the leads, Ching Siu-tung & Hou Chao-sheng, who together, bring an incredible energy to the screen. Not so much a comedy, but the sheer insanity of the kung fu action is enough to make any viewer laugh and shake their head in amazement. The story is simple; a pair of convicts escape from prison, to discover the mystery of "Gibbon fist," a kung fu technique thought to be lost. They each hold one half of a wooden amulet, and when it it is pieced together, it will lead the pair to a mountain top, where an ancient scroll is hidden. Of course there is a rival clan bent on destroying them and claiming the scroll for themselves. Along the way we join this crazy pair for some off the wall situations; like when Wei Chun (Ching) must battle his way out of a whorehouse after short changing the prostitute, (who kicks his ass with some truly eye-popping kung fu of her own.) In fact, you will see some of the absolute finest kung fu ever captured on film. Also known as "Stroke of Death," this one is a bit reminiscent of "Hellz Windstaff" in how the two friends seem to become one when fighting, working off each other to bring down their opponent. The more involved story and character development of Windstaff makes that one superior, but "Monkey Kung Fu" is a very worthy entry in the history of 1970's kung fu classics; Recommended.

MONKEY KUNG FU is a typical Hong Kong outing in the Jackie Chan mould, heavily derived from the success of Jackie Chan's incredibly influential double bill, SNAKE IN THE EAGLE'S SHADOW and DRUNKEN MASTER. Now, there were literally hundreds of Chan imitations being churned out in the years between 1979 and 1984, so films of this ilk have to have something really special about them in order for them to stand out.Thankfully, MONKEY KUNG FU does have something: it was made by Shaw Brothers, so the production values are much better than expected for this sub-genre. This is a fine looking film with all of the action taking place outside in a mixture of location shooting and the famous Shaw sets so beloved by fans. The plot is extremely slight and characters come and go according to plot contrivance; the bad guys, for example, helpfully disappear for a while to give our hero the chance to train up his skills. In addition, there's a real lack of momentum so that this isn't a particularly exciting picture in terms of narrative drive.However, the good news is that the action choreography is strong and the fights are fast-paced and wacky. The opening prison brawl between the hero and the old master is very well portrayed and then there's plenty of mileage in a brief chained-together plot. I loved the bit with the Bolo-alike blacksmith and his sledgehammer. Later, things get bogged down in the hunt for an old manuscript, but pick up again for some great training sequences that have a really vicious streak. The final fight boasts a beautiful backdrop and some typically skilled and furious fighting styles. Overall, this is far from the best that Shaw made, but as a light action comedy with decent choreography, it's difficult to dislike.