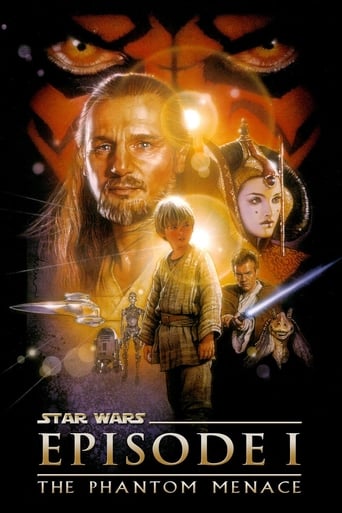 Anakin Skywalker, a young slave strong with the Force, is discovered on Tatooine. Meanwhile, the evil Sith have returned, enacting their plot for revenge against the Jedi.

Frankly, this film is terrible, and the producers were obviously banking on the original Star Wars coming back all excited, and didn't bother come up with a good story. What's wrong? Well -- (1) The virtuous Obiwan Kenobi talks an admiring young boy to participate in a dangerous race so that he can bet on the boy and win the money he needs for his mission. Sounds like the later movie HUNGER GAMES, except that in HUNGER GAMES we're expected to despise people who bet on children's lives. (2) The young boy befriends a teenage girl who is presumably 6 or 7 years older. Come the next movie, they're suddenly the same age so that they can have a love affair. Are they of different species that age at different rates, or did the writers simply not plan ahead? (3) The boy's mother tells Obiwan that she gave birth to the boy without having sex. Having introduced this bizarre Christological symbolism, the writers promptly forget it. (4) And there's a character named JarJar, who apparently has no function in the movie except to irritate a lot of the critics.

***Solid return of the franchise after 16 years, highlighted by Liam Neeson*** A Jedi Knight & his apprentice (Liam Neeson and Ewan McGregor) escape a blockade with their new Gungan friend, Jar Jar Binks, and the handmaiden of Queen Amidala (Natalie Portman). Upon damaging their vessel, they find sanctuary on a planet where they meet a slave boy, a gifted pilot and engineer, who may be the prophesied “Chosen One.” Meanwhile, the supposedly extinct Sith resurface, including Darth Maul (Ray Park). "Star Wars: Episode 1 – The Phantom Menace" (1999) is the fourth Star Wars film and the first of the prequel trilogy, followed by “Attack of the Clones” (2002) and “Return of the Sith” (2005). It marked writer/director George Lucas’ return to the popular franchise after 16 years, the previous film being “Return of the Jedi” (1983). Star Wars is fantasy packaged as science-fiction or “space fantasy” whereas Star Trek is dramatic science-fiction in a space-travel context. I’ve always preferred the latter because it’s more adult-oriented, but I don’t mind a Star Wars flick now and then and “The Phantom Menace” is entertaining enough. There’s a new cast of characters along with a young version of Obi-Wan Kenobi and R2D2, C-3PO, Yoda and Jabba. Liam Neeson stands tall as the no-nonsense Qui-Gon Jinn, McGregor is solid and Portman is attractive at the young age of 17. Also notable is Hugh Quarshie as Captain Panaka. I didn’t mind the loathed Jar Jar Binks and I enjoyed the wondrous underwater sequence and the thrilling podrace in the first half (even though the mother allowing her son to enter the life-and-death contest is unlikely, not to mention the Jedi knights condoning it). Unfortunately the climax comes down to the clichéd “big battle sequence” and it’s predictable who’s gonna die in the corresponding duel. Yawn. Still, “The Phantom Menace” is all-around entertaining if you have a taste for Star Wars. The film runs 2 hours, 16 minutes. GRADE: B-/B

This is a terrible, terrible movie. I'm amazed that A) Lucas made a film like this, knowing how beloved the franchise was, and B) that the franchise remained so beloved after this had come out... It introduced Maul though, who is my favourite _Star Wars_ character. So points on that one. _Final rating:★★ - Had some things that appeal to me, but a poor finished product._

A huge drop off the original trilogy. I still like it, mind. I do have split feelings about <em>'Star Wars: Episode I – The Phantom Menace'</em> though. One positive is the casting, which is well done. Liam Neeson and Ewan McGregor are strong choices to enter the franchise, I enjoyed both of them. Jake Lloyd does a fine job in his role, while the likes of Terence Stamp, Samuel L. Jackson and Keira Knightley also feature. Natalie Portman appears too, but I honestly never really cared for her lot's side of the story. Ahmed Best, meanwhile, is very hit-and-miss as Jar Jar Binks. Speaking of Binks, the CGI is rather iffy in this fourth installment of <em>'Star Wars'</em>. Of course it did come out in 1999, but other films from that era and beyond have aged better in these terms. The score is, at least, more than up to scratch. Overall, I'm OK with this but it most definitely should've been far greater. Some scenes do go on for too long, while I did find a lack of a serious threat for the first chunk of the film. Darth Maul looks the part, but ends up being rather forgettable. I can see how diehard fans of the series could be disappointed by this.

So I watched this at a midnight screening when it was released (the first time midnight screenings happened...). The blast of horns for John Willams' score occurred and the title scrawl happened, droidikas appeared - I had a buzz going. But that buzz got less and less as the film wore on. Jar Jar appeared...and then Anakin trying to crack onto Padme...Darth Maul appeared and I got excited, but the dialogue continued like a child had written it and the excitement had dissipated by the time the Pod Race started. It was the first time I had really been deeply disappointed by a movie. The came the Lego Star Wars games...and this movie became alright. Probably because Lucas had made this film for kids (hence the overly simple plot and dialogue), is why it worked so well with Lego characters miming scenes. I have watched this now countless times as a part of the 4-6, 1-3 order of Vader being a villain, redeeming himself and then becoming a villain. And my appreciation of it has grown a little. The CGI for the time was great - it has become old though; and the movie relies on this too much, so some scenes do not feel grounded (or have people looking into space rather than at a character). Im now OK with the pod race as a homage to Ben Hur - the details that have been thrown into it are grand, and it is a good length for the film. And I really like that Lucas tried to expand what goes on in this universe. He started the world building quite well, but this meant A LOT of exposition to catch people up on how things are different to 4-6. I dont mind that, there was a lot of exposition in 4 as well. And as always, Lucas put in details that you didnt expect, like Yoda's comments to ObiWan that he could see QuiGon in him, or the spinning parts in C3PO, or R2's introduction and his quippy nature from the start. Setting part of the film on Tatooine is actually smart (Anakin hates it, so Vader wouldnt go searching there between 3-4). And having a planet that is not just a desert, or show, or a forest, or lava, or a city, but that is like Earth is refreshing in this series. I dont even mind the Midichlorian comcept - why wouldnt an advanced society try to find out how "magic" happens and find a way to test for it? But you can also see the things where Lucas just tried toooo hard- they stand out like nothing else. And here are the usual topics for this film - JarJar, having to go to Atlantis (you could take both of these things out and the plot and character development wouldnt change at all), the under-developed plot and dialogue, Anakin being "bratty". The Pod Race also feels kind of superfluous - written into the plot as Lucas wanted to "homage." And Ill give it credit for actually trying to do something and expand the universe (unlike the dreadful Ep 7, but thats another story). There are consequences in this universe and foreshadowing of some things to come. we got to see how the Jedi worked in their prime (and moreso in Ep 2). As movies go, this one is really mixed. But it is a great computer game.