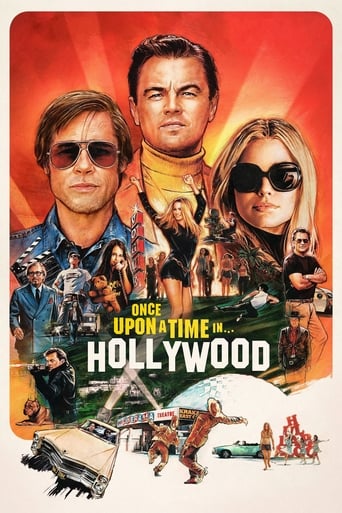 Los Angeles, 1969. TV star Rick Dalton, a struggling actor specializing in westerns, and stuntman Cliff Booth, his best friend, try to survive in a constantly changing movie industry. Dalton is the neighbor of the young and promising actress and model Sharon Tate, who has just married the prestigious Polish director Roman Polanski…

Quentin Tarantino's Once Upon a Time... in Hollywood visits 1969 Los Angeles, where everything is changing, as TV star Rick Dalton (Leonardo DiCaprio) and his longtime stunt double Cliff Booth (Brad Pitt) make their way around an industry they hardly recognize anymore. The ninth film from the writer-director features a large ensemble cast and multiple storylines in a tribute to the final moments of Hollywood's golden age.

The movie isn’t for everyone, of course, but it’s a fun ride back to the past with fantastic performances, hilarious comedy and beautiful aesthetics. Tarantino is the one director in 2019 that can get huge names without people referring to his films as “that Leo film“, and I think that’s worth something whether you’re a fan or not. It’s rare for a film like this to be a mainstream release, and in the lacklustre year of 2019 I think it’s about time we got something in cinemas that's original. - Chris dos Santos Read Chris' full article... https://www.maketheswitch.com.au/article/review-once-upon-a-time-in-hollywood-another-tarantino-classic

I'm not here to explain _Once Upon a Time In Hollywood_, just to enjoy it. _Final rating:★★★★ - Very strong appeal. A personal favourite._

***Tarantino’s revenge on the Manson psychos*** In the late 60s, Rick Dalton (Leonardo DiCaprio), a popular TV Western actor, finds his career taking a downturn and tries to recover with the encouragement of his kick-axx stunt double and best friend, Cliff Booth (Brad Pitt). Sharon Tate (Margo Robbie) & Roman Polanski are neighbors with Jay Sebring always hanging around (Emile Hirsch). Meanwhile the Manson Family nutjobs are lurking in the background, prepping to attack. “Once Upon a Time… in Hollywood” (2019) is Quentin Tarantino’s 9th full film and, for me, ranks somewhere in the middle of his oeuvre. It may not be as great as “Pulp Fiction” (1994) and “Django Unchained” (2012), but it places well with “Inglourious Basterds” (2009), “Jackie Brown” (1997) and “The Hateful Eight” (2015). A famous director once succinctly defined a great movie as such: Three good scenes, no bad scenes. While the second part of this definition is debatable with "Once Upon a Time... in Hollywood,” seeing as how the movie could've certainly been tightened up (there are some dull sequences), there's no doubt that it fulfills the first part. My three favorite scenes are: The amusing satirical Bruce Lee confrontation; the great Spahn Ranch episode, which effectively creates an underlying sense of menace; and, of course, the entertaining hippie attack in the final act. Thankfully, there are numerous additional gems: The friendship and respect of Rick and Cliff; the audacious flamethrower sequence; Rick's breakdown with the precocious girl actor (not actress); the beautiful women throughout; the great cast, including several celeb cameos; the entertaining soundtrack; Brandi, the pit bull; Rick's meltdown in his trailer; Rick finally pulling off a quality acting scene via ad libbing; George Spahn not remembering Cliff; everything (surprisingly) turning out to be precisely as so-and-so said; the allusion to what MAY have happened to Cliff's nagging wife (Rebecca Gayheart) on the boat; the way it should have turned out on that infamous night; and the heartwarming close, The film runs 2 hour, 41 minutes, and was shot in the Los Angeles area. GRADE: A-

Well, the last 15-minutes were great, the first 2.5 hours on the other hand was... uneventful. I have an interest in Hollywood, more from the 1980s though, so some of the slower scenes still kept my attention, but there's no real plot and minimal character development. That said, DiCaprio and Pitt both give great performances and Margot Robbie of course had her moments, however I could only chuckle during the theater scene when she kicked her bare feet up. Okay, Quentin, lol. **3.0/5**

“When you come to the end of the line, with a buddy who is more than a brother and a little less than a wife, getting blind drunk together is really the only way to say farewell.” ‘Once Upon a Time In Hollywood’ is a chilled blast from the past told like a fairy tale. It’s both aimless and yet meaningful with the commentary on the new era in Hollywood. The movie pays tribute to old Hollywood, film making, Sharon Tate, stunt work, and actors. This is perhaps Tarantino’s most personal and mature movie his made, until the last 10 minutes (which I love) goes complete ape sh*t. I can’t think of any other director where the passion and love for movies is so transparent through Tarantino's craft. He’s such an old school film maker that he and Martin Scorsese are the last golden age directors, as every new release feels like an event. In this movie, Quentin presents 69’ Hollywood at its peak, as he remembers it from his childhood. He manages to rebuild classy LA thanks to the crew and creative team. Bright neon lights, fashionable clothes, and late 60’s automobiles. There’s a couple of scenes where Cliff Booth (Brad Pitt), drives around LA and there are long shots that shows off the environment and it’s amazing the amount of detail and effort went into the setting - with Robert Richardson brilliant Cinematography bringing it all alive. Leonardo DiCaprio was absolutely excellent as the fading Western star, Rick F**king Dalton. Dalton, a self-centered, yet vulnerable actor that you both laugh and pity. I will often forget about DiCaprio comedic chops, something similar to Ryan Gosling. I also like the subtle stutter that’s sprinkled through out, which is sad when given some thought that it’s something he’s got to deal with. There’s a heartfelt scene where Dalton tells his young co-star about a book his reading and mid way through explaining the story he realises it mirrors his life, and breaks down in tears with me crying with him. Yep, I teared up in a Tarantino movie. Leo was the pulse of the movie. Brad Pitt was amazing as the deadpan and cool Cliff Booth. This is probably my favorite performance from him. Cliff’s main character trait is his strength and he demonstrates it multiple times, but leaves the scene before anything can escalate. The chemistry between Leo and Brad was electric. Pitt was the meat of the movie. Margot Robbie was an absolute delight portraying the late Sharon Tate. Despite her slim screen time, but whenever she has screen time, I couldn’t help but smile. I instantly fell in love with her and it’s painfully to think something so sweet and pure could be taken away from us by brainwashed zombies who don’t deserve a life, just a jail cell. I thought her portrayal in the movie was a beautiful tribute and how they handle her gives new life into her legacy. There’s a great scene where Sharon Tate watches a movie in cinemas that’s she’s in, but instead of Margot Robbie re-creating those scenes, they just show the real Sharon Tate in the movie. Now people were left a bit confused over this decision, although it’s clear to me that erasing the real Tate out of the movie would be more disrespectful to her memory, so leaving her in is a touching tribute to her career and her work. Robbie was the heart of the movie. The other supporting cast all did terrific with the little screen time most of them had. Kurt Russell makes a welcoming return as a character that I assume is Stuntman Mike from 'Death Proof' - either way still a welcoming presence. He’s also the narrator and I find it hilarious whenever he tries to pronounce Italian movie titles. Al Pacino was a blast to watch as the tight and yet colorful producer. Mike Moh portrayal of Bruce Lee may have sparked some controversy recently, but I thought he was entertaining regardless and I don’t really think it mocks his legacy at all. I mean, this is the same director who made a four hour movie honoring the legend. Margaret Qualley was crazy good as the hippie girl who’s brain washed into a cult family. It’s crazy to know that Damon Herriman has played Charles Manson twice in the same year and month for this movie and the TV show ‘Mindhunter’, which you should totally check out by the way. Julia Butters, Luke Perry, Timothy Olyphant, Dakota Fanning, Bruce Dern, and Damian Lewis - a stellar cast that did a stellar job. After letting the film sit for awhile, there’s so many memorable lines that I would often catch myself recreating just from memory after seeing it twice. There’s so many great moments as well. The lights of LA coming to life at the dust of dawn, or the suspenseful scenes that actually got me feeling tense watching it. Without spoiling anything, but the Spahn Ranch scene where the Manson family stares down a defenseless Cliff Booth as he tries to speak to an old friend was terrifying - reminds me of the opening scene of ‘Inglorious Bastards’, in terms of building up tension that you wait in anticipation to explode. Still, I think this is the best representation of the Manson family I’ve seen in any movie...by portraying them as absolute buffoons. And of course with it being a Tarantino movie, the music is lost treasure revived for a modern generation. Always fantastic and incredibly catchy. I can’t think of anything better than Cliff driving around LA with the song ‘Bring a Little Lovin’ playing in the background. Overall rating: I’ve seen this movie twice already and I still have a desire to watch it again. This is slowly creeping up to being my favorite Quentin Tarantino movie, but time will tell I guess.

The first 2 hours is only for lovers of everything late 60s retro,great cinematography and outstanding acting.The last 45 minutes fasten your seatbelts because classic Tarantino kicks in.

I love Tarantino. I was super excited to see this. The movie started. And then it went. And I waited for the plot. And then it came and went within the last 15 minutes of the film. Then I left confused and a little disappointed.The movie just felt like Tarantino wanted to show off how much he knows about film history and how nostalgic the old Hollywood made him feel. The acting was amazing. The cinematography was amazing. The storyline just wasn't there though. I want to say I loved it so bad but it just felt so flat to me.The characters didn't really develop at all. Leo's character just kind of changed halfway through with only a narration as to why he was different. Brad Pitts character was the exact same the entire film. Margot Robbie's characters development was that she finally said like 20 words at the very end.The ending was the most enjoyable part without a doubt. That felt like a classic Tarantino scene. The rest of it though just felt like a normal movie. The dialogue didn't feel like him to me for the most part, with the exception of a few scenes. The soundtrack was phenomenal and caught the vibe of the movie flawlessly.Maybe I was just hoping for more or maybe I missed out on something. It was an enjoyable movie, but it just felt off to me. I really hope he will make a final movie to end his career with a bang, because this is not the one