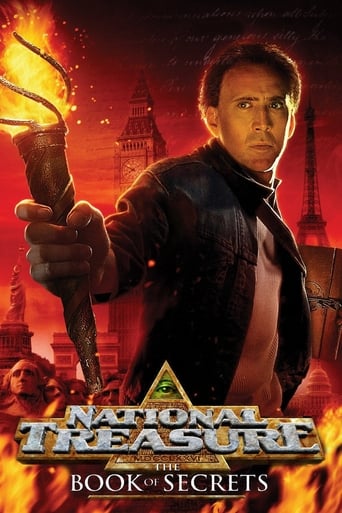 Benjamin Franklin Gates and Dr. Abigail Chase re-team with Riley Poole and, now armed with a stack of long-lost pages from John Wilkes Booth’s diary, Ben must follow a clue left there to prove his ancestor’s innocence in the assassination of Abraham Lincoln.

While Ben Gates is presenting new information about John Wilkes Booth and the 18 pages missing from Booth's diary, a man by the name of Mitch Wilkinson stands up and presents a missing page of John Wilkes Booth's diary. Thomas Gates, Ben's great-grandfather, is mentioned on the page. It shows that Ben's great-grandfather was a co-conspirator in Abraham Lincoln's murder. When doing more research, the conspiracy takes Ben, Abigail Chase, and Riley Poole to Buckingham Palace (which they break into). They discover a plank that has early Native American writing on it. The plank has only one symbol that Patrick Gates can identify. The symbol is Cibola (see-bowl-uh) meaning the City of Gold. In order to define the rest they have to go to Ben's mother, Patrick's divorced wife. After 32 years it brings back old arguments. After that the other clue is in the President's desk in the Oval Office in the White House (which Ben and Abigail sneak into) to discover that the clue lies in The ...

Joyous boys own yarn full of the serial silliness of movies past, present and the first movie! As with the enormously successful first film, this sequel irritated as many people as it entertained. It's just the nature of the family friendly blockbuster, that some film fans refuse to accept them as viable fun family fare, whilst others can easily run with it and have a great time. The highbrow versus the lowbrow? Well maybe if you want to really be speaky arty about it... National Treasure: Book of Secrets made over $450 million at the worldwide box offices. Now we are told that financial success is no marker for quality of product, that's fair enough, but what is undeniably true is that it means there were considerably "a lot" of happy paying punters! From way back in the day when we had the likes of Gunga Din, Beau Geste and The Adventures of Robin Hood, there has been a considerable market for the action adventure movie. Some are better than others, some are even more brainy, but mostly they deliver a set pattern of what many people want. The makers of this sequel just go bigger than the first film whilst following exactly the same formula. Nicolas Cage's treasure hunting Benjamin Franklin Gates has to follow clues to treasure again, only this time it's to clear his family name since his granddaddy has been implicated in the assassination of Abraham Lincoln. Justin Bartha and Diane Kruger are again along for the ride, while Jon Voight gets more screen time as Daddy Gates. Helen Mirren joins the fray as the estranged Mommy Gates, Ed Harris slots in for villain duties and Bruce Greenwood adds class as the president of the USA. The stunts and set-pieces are humongous, the traps and clues more elaborate than before and the photography (Amir Mokri and John Schwartzman) once again is gorgeous. It hurtles along at a nifty pace, stopping only to explain the various plot machinations to younger viewers, and the comic by-play between all the principal players is set in stone. Is it full of implausibilities, insulting history and credulity stretching beyond belief? Yes! Of course, that's why many of us action adventure fans escape into such high energy nonsense. Those expecting cerebral tickles or those offended by basic family blockbusters should quite simply stay away. 7.5/10

This movie is the second part of 'national treasure'. The lead character finds a treasure map in a dairy. He seeks for the treasure with his girlfriend and his partner. This movie was not so good as first part. But I like some comedies in this movie. I suggest all to watch this movie with your families.

National Treasure: Book of Secrets is a better movie then the original national treasure movie. The cast stays the same except trade in Sean Bean for Ed Harris and add on Helen Mirren. The acting is good here, I enjoyed cage and Kruger, very good chemistry, even better here than in the first. And I loved seeing Helen Mirren in this film, she is a fine actress and I loved her performance as Ben's mom and Patrick's ex-wife. The dynamic between Mirren and Voight is interesting and they work very well together. On to the action and treasure hunting. The action are done well, not overstuffed with over the top special effects and not cheesy looking. The movie has a nice pace to it and I enjoyed every destination they went to, they were all important to the movie as a whole. This is pretty enjoyable film that is sure to entertain all audiences. I definitely suggest it for family viewing, it's not too rough or intense or too weak and child like, perfect medium. The kids will have good fun with the treasure hunt and the clues they discover along the way and with the action sequences. And the adults can enjoy that and the interesting interactions between the characters that will probably fly over younger kids heads. 8/10 for national treasure: book of secrets.

Downloading Seeding National Treasure Book of Secrets (2007) [1080p] from to 0 peers.
of
↘0 b/s / ↗0 b/s
Read our blog post about Streaming Torrents From Your Browser