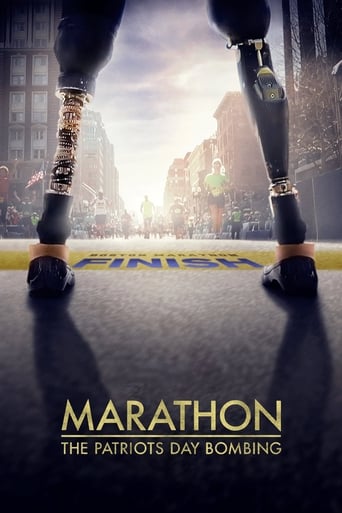 Recounts the dramatic story of the April 2013 terrorist attack at the Boston Marathon through the experiences of individuals whose lives were affected. Ranging from the events of the day to the death-penalty sentencing of Dzhokhar Tsarnaev, the film features surveillance footage, news clips, home movies and exclusive interviews with survivors and their families, as well as first responders, investigators, government officials and reporters from the Boston Globe, which won a Pulitzer Prize for its coverage of the bombing. In the wake of terrorism, a newlywed couple, a mother and daughter, and two brothers - all gravely injured by the blast - face the challenges of physical and emotional recovery as they and their families strive to reclaim their lives and communities.

Documentary about several survivors of the Boston Marathon Bombing which took place April 15| 2013. Downloading Seeding Marathon.The.Patriots.Day.Bombing.2016.WEBRip.x264-ION10 from to 0 peers.
of
↘0 b/s / ↗0 b/s
Read our blog post about Streaming Torrents From Your Browser