Movieskeyboard_arrow_right1080p
Warning! Use a VPN When Downloading Torrents!
Your IP Address is . Location
Your Internet Provider can see when you download torrents! Hide your IP Address with a VPN
⚠ibit warns: You must use Trust.Zone VPN to hide your torrenting. It's FREE HIDE ME NOW 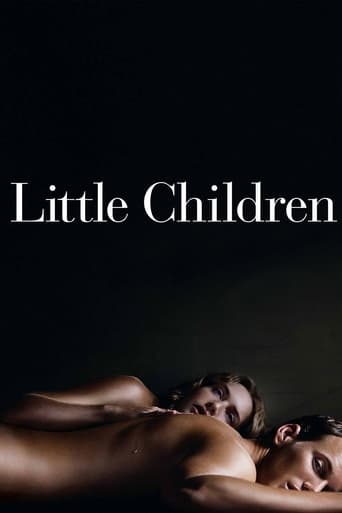 The lives of two lovelorn spouses from separate marriages, a registered sex offender, and a disgraced ex-police officer intersect as they struggle to resist their vulnerabilities and temptations.

Echoes of "Madame Bovary" in the American suburbs. Sarah's in a loveless marriage to an advertising executive, long days with her young daughter at the park and the pool, wanting more. Brad is an immature househusband, married to a flinty documentary filmmaker. Ronnie is just out of prison - two years for indecent exposure to a minor - living with his elderly mother, May; Larry is a retired cop, fixated on driving Ronnie away. Sarah and Brad connect, a respite of adult companionship at the pool. Ronnie and Larry have their demons. Brad should be studying for the bar; Larry misses his job; Ronnie's mom thinks he needs a girlfriend. Sarah longs to refuse to be trapped in an unhappy life. Where can these tangled paths lead?

I was walking home the other evening having just watched this at the theatre. Two guys were ahead of me on the street and had just seen it as well. Not intending to listen in on their conversation ... I did anyway, LOL. One asked his friend what he thought about the movie and the second took a moment to think about it. His answer? "Twisted man, too twisted!" Thoreau wrote in Walden that "the mass of men lead lives of quiet desperation." In 'Little Children,' we see that quiet desperation played out to full effect by desperate housewives, ex-cons and damaged loners. A deep study of loneliness, 'Little Children' is morally ambiguous and doesn't judge. It uses humour, it uses dread, and it is a film that is at times quirky, intelligent and ultimately fascinating.I liked a lot of things about this movie and in the week since I saw it, I've grown to like it more. Thematically it should have been a terrible downer: a collection of people who've all settled into what seems like the beginning of the end. They've married, started having kids and every single one of them wakes up in the morning with dread. "Is this all that is left?" They have become, or more importantly, believe that they have become completely purposeless in the next of a continuing doldrum of empty days. Eternity awaits and eternity is purposeless existential hell.What is remarkable about a film whose subject should be so bleak, is the warmth and humour within it. Characters in 'Little Children' reject the lack of purpose, the unhappiness and try to re-inject a passion for life that they once had. At its most extreme, the quest for passion and purpose is lead by Noah Emmerich -- certainly most of the humour comes from his character. Winslet, Wilson and Emmerich are all flawed (who isn't?) but sympathetic. And then there is Jackie Earle Haley.How difficult must it have been to play a convicted sex offender who is both repellent and gasp sympathetic? If you're Jackie Earle Haley and you are stealing a film away from bigger stars and you've got a great part, then apparently it isn't very hard at all. Creepy, potentially dangerous but also fairly benign and pitiable, Haley gives a much over-looked performance in what is quickly becoming a much over-looked film. He has given what I think is one of the best performances this year, and what is certainly the best performance of his entire career.'Little Children' is "twisted man, too twisted" but it is also very good and very compelling. Well worth the risk and extremely well paced. It was only after the film had ended that I noticed how long the film was. Completely engrossing, I recommend it highly.

Bedrooms still play an important part in Todd Field universe but this time there is an outing, intellectual and emotional, that overwhelms in the apparent patina of familiarity. "Little Children" sizzles with an uncomfortable sense of impending doom. Kate Winslet, through her later day Madame Bovary, gives us a character that is recognisable and never seen before at the same time. Powerfully honest to the point of self destruction and yet, her feelings seem so clear and pure, so innocent. Kate Winslet in a superlative performance, invites us to believe that a human being can inhabit that contradiction without seem absurd. Patrick Wilson's courage without brains or vice versa is an uncomfortable pleasure to watch. Jennifer Connelly has one of the most chilling domestic moments I've seen in a long time: a moment of realisation at a dinner table. Contradictions, perhaps, are at the centre of this wonderfully conceived universe, Weary of domestic bliss. compassion for a child molester. Jack Earle Haley's psycho is not played for sympathy - he is a horrible character. He and his mother, the great Phyllis Somerville - are a realistic version of a Hitchcockian coupling. Adult entertainment, yes entertainment too, of the first order.

"You couldn't change the past," the narrator of Little Children tells us at the movie's close, "but the future could be a different story." The lives of the men and women who live in the very paragon of bland suburbia appear to be crunchy (and even somewhat unforgiving) on the outside, but inside they break, well, just like a little girl. A veritable sea of emotions, from love, despair, neglect, and hate churns below their pristine, everything-in-its-place veneers.The placidity of this particular neighborhood is jolted by two things: the arrival of a sex offender (Jackie Earle Haley) and the emergence of a relationship between married-but-not-to-each-other Sarah and Brad; both events, directly and obliquely, are remarked upon by the nattering nabobs of middle-class conservatism in the town, particularly the rather particular hausfraus and soccer moms.Sarah Pierce (Winslet) is a distant mother and wife; when she and her daughter Lucy visit the neighborhood playground, she sits away from the other mothers. As an indirect result, Lucy doesn't play with the other boys and girls on the see-saws or merry-go-round - she just plays quietly. Meanwhile, as the empty-headed women babble to each other (but not Sarah), a newcomer enters their midst - a stay-at-home father, Brad, whom they mockingly call (behind his back, of course) "The Prom King." Sarah's marriage seems empty and devoid of purpose. Brad, for his part, is married to a breadwinner - his wife Karen (Jennifer Connelly) is a documentary filmmaker who's completely absorbed with her work. Like Sarah, Brad is a little emotionally distant from his wife and their son, Aaron, so it's no wonder he and Sarah become constant companions throughout the long, hot suburban summer, spending their days either at the park or at the public pool.The other main story thread involves the community's reaction to the presence of Ronnie McGorvey, convicted as a sex offender for flashing a young boy. Soon, there are fliers on telephone poles, and an angry outrage group is formed, led by ex-policeman Larry (Noah Emmerich), who seems to be more upset with Ronnie's existence than anyone else in the town.At its core, the movie is about repression and "settling" - staying with someone just because they provide you comfort but no love is no reason at all, the film explains. Committing adultery just might be an okay act, even with children involved, as long as it means a better life for the principals. Brad and Sarah transform from nodding acquaintances to good friends who take care of their kids together (Aaron and Lucy even grow to become friends, although up to that point they'd both been loners.) When the opportunity arises for them to become more, though, they take it - an act that's not easy to conceal from the prying eyes of the neighbors, let alone their respective spouses and certainly not their children. How long, if at all, can they possibly hope to maintain the charade that they're just friends? Perhaps the thought that their own, current marriages are charades in their own right gives Sarah and Brad reason to believe they can perpetuate the sham against their spouses.Meanwhile, Ronnie attempt to cope with living as a sex offender. He lives with his doting mom, who believes there is good in everyone; she realizes that what Ronnie did was wrong, but that it was an accident, and she tries in vain to protect him from the rest of the community, which is by and large out to lynch him. But the brilliant caveat here is that Ronnie is by no means a victim - not only did he do what he was accused of (although he shows remorse and a lot of self-hate), but he shows that he's capable of more of the same.In fact, that's the genius of Todd Field's film - not only are people flawed, but they're believably flawed. In Little Children, people make decisions for selfish reasons, and there's no wondrous epiphany that somehow saves the soul and good standing of the poor decision maker - people live with what they've done, or they don't make the decision in the first place.Winslet and Haley were nominated for their work here; the first-ever nomination for Haley, who was probably best known as Kelly Leak in the Bad News Bears films. He's eerie and creepy and utterly human as Ronnie McGorvey. You never really feel sympathy for the deviant, but you might feel a twinge of unease. For Winslet, this was the fifth nomination for the beauteous Briton, and it's astounding that she hasn't yet won. Then again, she's only 31 years old! Little Children is a stark, seamless, unsettling story that grabs a hold of your psyche and twists it almost to the breaking point, relying on strong performances by Winslet, Haley, Wilson, and Emmerich as well as a tortuous plot that provides quite a jaded look at the tranquility of suburban life.