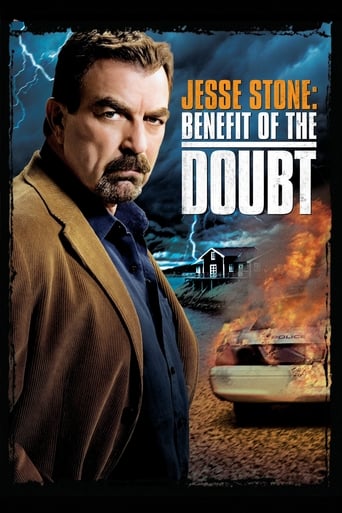 Jesse finds himself struggling to get his job back as the Paradise police chief, and he is forced to rely on his cop intuition to sort through a maze of misleading clues and hidden meanings as he attempts to solve a shocking and horrifying mob-related double homicide.

**The one man force.** The eighth film in the Jesse Stone series based upon the characters created by Robert B. Parker. If you had read all my previous reviews of this series, you would know how much I'm looking forward for this. Not like I'm happy with the series to continue, but the last couple of films were below par than usual Jesse films. Like always, I went for it expecting the series could get better, and does it fulfill my desire? I won't say it did, but surely a decent one. It had the opportunity to become much better than that, but it was the story, like they wanted to start off again from the scratch. So it was kind of a refresher in the series, there's big changes you would find from the very first scene itself. Jesse received his PPD cap, that mean he's back, but he's the only one left in the force. This time he brought in to investigate the death of his rival in the department. He also has a strong back from the town council, as well as from his Boston boss. So this is an important case for everyone, particularly for Jesse to get back like he always say this is his last stop. This is not a detached story, I mean not some new characters comes in, commits crime and got punished. This is really well improvised story within the available characters. So the viewers can be optimistic about guessing the events including the finale. Kind of depressing to see one man doing all the job. I mean it was always been like that in the series, but this time feels it was a slow presentation. Jesse is no Rambo, yet feel he's isolated. I liked how the film developed with the existing characters. That means there's a serious change in characters, like many are from the previous films went missing and some of those who appeared in this were involved in termination. So the next film will be very interesting, whether there will be a bunch of new ones or the old ones return. > "Cop deserves the benefit of the doubt." Regarding the case he's on, he deals it on his usual way. But nothing seems a masterful, the twist and turns are ordinary. So don't anticipate any masterstrokes. Jesse was just roaming around seeking information and then suddenly he gets a clue he was looking for. With that he uses a bait to catch the bad guys and they fall for it. But while dealing it, the event takes an unexpected turn, leaves the story might continue in the following sequel as well. That's the confusing, because the film ran for nearly 90 minutes and did nothing to end on high as it does always. So with this kind of drag, I don't know where the series is heading. Like I always say, Tom Selleck is the reason I'm still hooked to this series. In this installment, it is all about him, because like I mentioned earlier, the next to his roles like Rose and Luther are off the hook. That means the Jesse's therapist like the third string characters automatically taken the leap forward, but nothing much expectable from them. Particularly Thelma, the Hasty's assistant seems interested in Jesse, but it does not tell us how serious it is. Because fighting crime takes over the this romance, or maybe we can call a flirtation like Jesse does to gain information. I think, again the follow-up is to answer that question. After getting into the rock bottom with the last film, this one looked much better, but still not the best I was looking for. It's just trying to be a normal film, like a television film from the old days and it succeeded somehow. So definitely it is a decent comeback and there's only one film to go for me to end the Jesse Stone series. Oh, I almost forgot that the original director returned for this, that's really amazing news for the series fans. Like the old team coming together, somewhat the series back on the track. The next film that released in the 2015 was received well, that's what I've heard, so can't wait to watch it. The final review on its way, meet me there. _7/10_

Downloading Seeding Jessie Stone Benefit of the Doubt 2012 DVDRip x264 - Acesn8s from to 0 peers.
of
↘0 b/s / ↗0 b/s
Read our blog post about Streaming Torrents From Your Browser