Hollywood: A Celebration of the American Silent Film 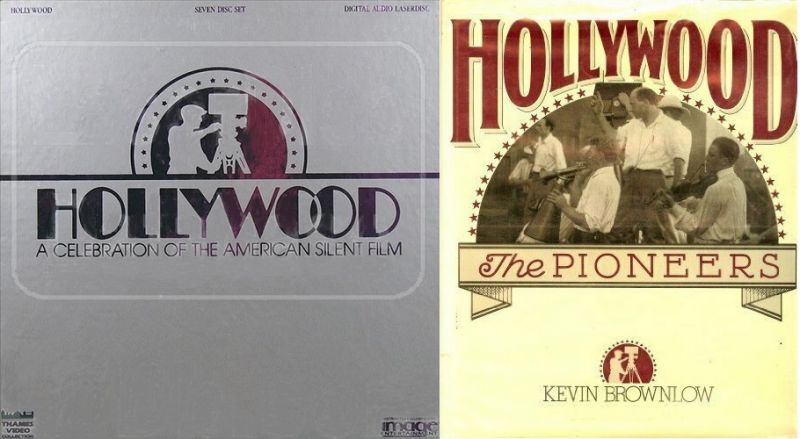 The award-winning team of David Gill and Kenneth Brownlow present a definitive and unparalleled look at the history of silent film in America: "Hollywood," narrated by James Mason. This 13-part series celebrates the birth of an industry, the town and people who made it all happen. People who, in a few short years, produced an enourmous range of spectacular, inventive and exciting films.
From the arrival of the filmmaking pioneers early at the dawn of a new century, through the outbreak of the first World War; from the rise of romance, to the demise of the Old West; from when comedy was king, until the advent of sound. These are the stars, the scandals, the directors, producers, cameramen, stuntmen and, of course, the films themselves that created the legend we know as "Hollywood."
The series showcased, for the first time on television, the greatest silent films as they were meant to be seen -- with the proper running speeds and orchestral scores. It was literally produced in the nick of time, as many of those interviewed would be deceased in a few short years - their wonderful memories lost forever. Episodes include interviews with notable directors and actors from the era along with family members of stars.

7)  The Autocrats
Two of Hollywood's greatest directors were Cecil B. DeMille and Erich von Stroheim. But what they shared in achievement, they never shared in success.
DeMille worked within the studio system, von Stroheim against it. And while DeMille's lavish productions reaped huge profits for the studios despite the millions they cost, von Stroheim's films were doomed to be hatcheted by the studio, if even released.
Includes rare footage and excerpts from MALE AND FEMALE (1919), THE TEN COMMANDMENTS (1923), FOOLISH WIVES (1922), GREED (1925) and QUEEN KELLY (1928); interviews with Gloria Swanson, Agnes de Mille, Henry King, Paul Ivano, and much more!

Downloading Seeding Hollywood.A.Celebration.Of.The.American.Silent.Film.07of13.The.Autocrats.x264.AC3.MVGroup.org.mkv from to 0 peers.
of
↘0 b/s / ↗0 b/s
Read our blog post about Streaming Torrents From Your Browser