Movieskeyboard_arrow_rightx264/720
Warning! Use a VPN When Downloading Torrents!
Your IP Address is . Location
Your Internet Provider can see when you download torrents! Hide your IP Address with a VPN
⚠ibit warns: You must use Trust.Zone VPN to hide your torrenting. It's FREE HIDE ME NOW 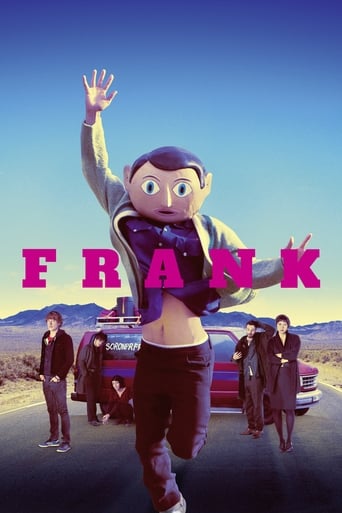 A young wannabe musician who discovers he has bitten off more than he can chew when he joins an eccentric pop band led by the mysterious and enigmatic Frank.

Jon| a young wanna-be musician| discovers he's bitten off more than he can chew when he joins an eccentric pop band led by the mysterious and enigmatic Frank.

Where to start with this movie, with **Frank**? Should I start with describing the man inside the giant head, or maybe the very head itself? I could also try and describe the plot, or maybe the music, the weird wonderful nonsense that Frank sprays from inside the head? No, perhaps it would be even better to start with the actor playing the man inside the giant head, or maybe the entire cast, who tries to cope with their friend, the world and their own problems? Actually, I think I might start here, with myself. I mean, who of us haven't felt like hiding inside a giant head? And yet, I am not sure that if I ever did hide inside a giant head, that I would be able to lifv as normally as Frank actually does. To him, the head actually helps make him more human, or maybe just... human. Thunk about it for a second, Frank is wearing a giant head, and not just while he is on the stage, singing, no this guy wears his head ALL the time, even when he is sleeping or taking a bath. And we accept it, in fact, while I watched the movie, I found myself hoping that he would never be forced to take it off. We simply don't need to know what is inside, because Frank IS the head. OK, let me try and break the plot down for you without giving too much away. A young man (Domhnall Gleeson) wants to make his own music, but honestly, he is beyond bad, he would need a miracle to break through in the music industry. That miracle comes one day, when a band arrives at his small village, Sonorpfbrs. Apparently the keyboard player wants to kill himself, which leaves a spot open for Jon (the young man). They manage to almost play a whole song before the band breaks up, in chaos. This is not your average punk band, but something a bit more... out there. The guy goes home, thinking that he wasted his one chance, but then one day, the manager (Scoot McNairy) calls him again. They are going to Ireland to record an album. The young man packs his back, thinking that he will be there for a day, but really, it ends up being closer to a year, and he ends up spending all his money to keep the band going. They have secluded themselves in the wilderness, and here Jon gets to learn the stories of all the bandmembers. Frank might be the one with the big fake head, but trust me, all the members have their own mental problems. No more plot for you, but you see where this is going. Everyone needs to figure out who they are, and if they really need to hide inside giant heads, big beards or nasty and unwelcoming personalities. Once the movie gets going, this is actually a less weird movie than I had expected, and that is not a bad thing. There is enough weirdness here for a lifetime, but there is also something very human here, and that is what drives the movie forward. Frank, of course, is the soul of the movie, and played with perfect execution by Michael Fassbender. And yet, the rest of the cast acts with the same careful precision as Frank, living their life on a knife's edge. You simply feel as if they could tip over at any moment and escape reality completely. Maybe I should also note here that no drugs are involved whatsoever, these guys are as clean as snow, they just have... issues. Last words... original, and yet, not as original as I had thought (or maybe even feared). The story here is one we've seen in many movies, but the package is just... so much better. Don't try and overthink it, just sit back and listen. If you are lucky, you might just learn a thing or two about yourself.