Movieskeyboard_arrow_right720p
Warning! Use a VPN When Downloading Torrents!
Your IP Address is . Location
Your Internet Provider can see when you download torrents! Hide your IP Address with a VPN
⚠ibit warns: You must use Trust.Zone VPN to hide your torrenting. It's FREE HIDE ME NOW 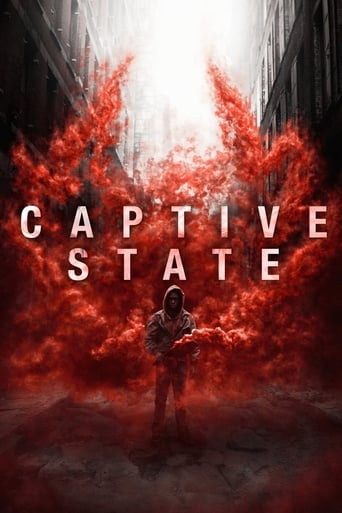 Nearly a decade after occupation by an extraterrestrial force, the lives of a Chicago neighborhood on both sides of the conflict are explored. In a working-class Chicago neighborhood occupied by an alien force for nine years, increased surveillance and the restriction of civil rights have given rise to an authoritarian system -- and dissent among the populace.

Set in a Chicago neighborhood nearly a decade after an occupation by an extra-terrestrial force, Captive State explores the lives on both sides of the conflict - the collaborators and dissidents.

If you enjoy reading my Spoiler-Free reviews, please follow my blog :) As a huge fan of the sci-fi genre, especially when it involves alien invasions of some kind, movies like this always leave me excited. It doesn’t matter what the audience or critics have been saying (in fact, it never does) because it won’t affect my enthusiasm (in fact, nothing does). By knowing who the cast, director, writers, and producers are, I instantly know how high or low I need to set my expectations. Having this in mind, I was hoping that Captive State could be one of 2019’s surprises. It has an unusual concept that can provide a very unique story if it’s well-told, so the big question is: did they execute all of their ideas successfully? Unfortunately, no. Not even close. Honestly, the screenplay is so convoluted and messy that I felt “lost” several times. I admire the amount of work that they put into this because they actually did and it shows. The overall concept and its ramifications are all there, the story is indeed interesting. It’s just the way that it’s told that ruins the entire thing. However, the first sentence I heard after the film’s conclusion, came from someone who said: “here I was expecting massive action and …” If you go into your movie theater expecting a straightforward, action-heavy, alien-invasion-type flick and you leave disappointed, that’s on you! From the trailers to its marketing, there was never a message of “hey, this is pure action, humans vs. aliens!” It tried its best to give the world a different take on this “sub-genre”, let’s call it that. I mean, they had it all: a good cast with the always astonishing John Goodman (William Mulligan) as one of the protagonists, beautiful visual effects that elevated the set design, and the aliens actually have an intriguing physical shape. Sadly, there’s barely any aliens throughout the runtime. There’s hardly … anything. I don’t know what happened post-production, but it feels like they were pushed to deliver something different, so they cut all of the other scenes with extra-terrestrial stuff (I’m certain that they had more to show). The main issue here is that you can never have a 100% ambiguous story. Arrival is probably the best non-typical alien-invasion movie ever, not because it scarcely shows any aliens or action, but due to its twistful and thought-provoking script. Nevertheless, it still shows a lot! You don’t leave that film disappointed because you didn’t see the inside of a spaceship or an actual alien. You leave perplexed and with your mind blown. Captive State just leaves you confused and wishing for more. A lot more. There’s really not that much more to say on this review without getting into spoiler territory. Sadly, this is one of those movies that come out every year showing tremendous potential, an innovative and intriguing premise, but that in the end, it just isn’t able to succeed. It doesn’t structure its story and ideas in the most efficient way possible. Its execution is sloppy, filled with hollow characters, no real flow (it feels like it’s just a scene after another scene), too vague, and it profoundly hopes that you didn’t figure out a pretty obvious twist so they can shock you seconds away from the end. It’s not horrible, but it’s definitely frustrating and disappointing. John Goodman delivers a great performance as always, and the visual effects are striking, to say the least. The production quality is undeniable, they really worked hard to provide the audience with an environment that actually feels real. The first act is pretty good, but it’s downhill from there. Ashton Sanders shares the lead with Goodman, and he’s also pretty good, no doubt about it. However, and this sums up the film pretty well: if I have to check online what the name of the main character was (Gabriel Drummond), then something went terribly wrong. It’s not going to end up being one of the worst movies of the year, but so far, it’s the biggest letdown. Rating: C-

Honestly don't really know what I just saw. It's like if _The Battle of Algiers_ had no nuance, or if _District 9_ you know... sucked. _Final rating:★★ - Had some things that appeal to me, but a poor finished product._