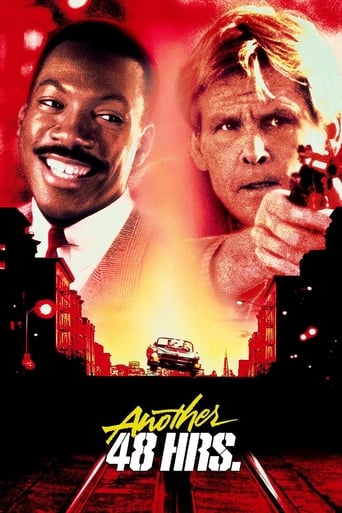 For the past four years, San Francisco cop Jack Cates has been after an unidentified drug kingpin who calls himself the Ice Man. Jack finds a picture that proves that the Ice Man has put a price on the head of Reggie Hammond, who is scheduled to be released from prison on the next day.

Jack Cates once again enlists the aid of ex-con Reggie Hammond - this time to take down The Iceman, a ruthless drug lord operating in the San Francisco bayarea. You got framed. That's what every convict says! The theme tune says it all really, the boys are back in town. Nolte and Murphy are back together as cop and convict wading through a plot as lazy as it gets. Walter Hill directs once again and it's only his action scenes that stop this from being an outright stinker. Every thing about it comes off as a cheap cash in lacking originality, with scenes even reproduced from the first film here. A strong supporting cast of character actors file in to make some easy money, with the likes of Brion James, Ed O'Ross, Brent Jennings and Kevin Tighe at least proving to be reassuring presences. Murphy and Nolte jostle, fight each other and swear a lot, which would be OK were it not already done so much better in the first film. All things considered, it's a no brainer really to suggest you watch the first film instead. 5/10

A bit weak and the "conflict" between Nolte and Murphy was pretty convoluted (no reason for Cates to hold the money over Reggie's head to help with his investigation) but the action was okay including an over-the-top gun battle finale with a ton of broken glass everywhere. It's okay as a time-waster but nothing overly memorable. Have to wonder if this was made given the success of Lethal Weapon three years earlier (which itself was a success probably thanks to 48 HRS). **2.75/5**