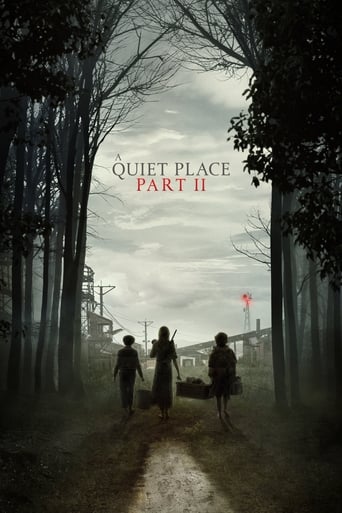 Following the events at home, the Abbott family now face the terrors of the outside world. Forced to venture into the unknown, they realize that the creatures that hunt by sound are not the only threats that lurk beyond the sand path.

Following the events at home, the Abbott family now face the terrors of the outside world. Forced to venture into the unknown, they realize the creatures that hunt by sound are not the only threats lurking beyond the sand path.

Last year we had a screening for “A Quiet Place Part II” scheduled and eagerly awaited the follow-up to the suspenseful and popular original film. Sadly we all know what happened soon after as a two-week lockdown grew and cinemas around the world were closed. As cinemas re-open with growing but limited capacity; the film is set for release and will be a great indicator as to if the public is ready to return to cinemas in significant numbers or will they sit it out and opt to see the film down the line on Paramount+. The film opens with a look at the day things changed for the world as Lee (John Krasinski); does some shopping while news reports come in of an explosion in Shanghai. Enjoying the weather; he joins his family at a Little League game and talks with his friend Emmett (Cillian Murphy) when the game is interrupted by the appearance of a large fireball in the sky. As they head home; the city falls under attack by deadly creatures and Lee and his family narrowly escape. The film then jumps forward immediately following the conclusion of the first film and Evelyn (Emily Blunt); attempts to lead her newborn son, daughter Regan ( Millicent Simmons), and son Marcus (Noah Jupe) to a safer locale. When Marcus is injured along the way; Evelyn takes refuge with Emmett who is not happy to have to care for others after the loss of his wife and despite a secure locale in a foundry; demands the family leave the following day. When an unexpected radio signal appears; Regan is determined to leave and find the source as she knows the frequency of her Cochlear Implant is a weapon against the creatures and she figures if that can be broadcasted and the information revealed; then humanity has a chance to fight back and win. What follows is a very gripping and intense story as Regan and Emmett attempt to complete the mission while Evelyn and her family endure all manner of threats as they try to survive. The film builds upon what made the first film so great in that there are strong and relatable characters and some very tense situations. The screening we attended was so quiet you could tell that audience members were so enthralled that they were afraid to make any noise. The film ups the action and expands upon the universe without losing any of the strong character-driven elements or relying too much upon CGI to carry the film. John Krasinski writes, directed, and produced the film, and while he has less screen time than he did in the original; the film is the rare sequel that holds its own and actually improves upon the original. My only issue with the film was that the ending was rather abrupt and left me with several unanswered questions. While this would be more than fine if we were assured of a third film to resolve unanswered elements; word is that a spin-off is in development so hopefully this will resolve the issues I had or at the least co-exist with a third part of the series. For now; “A Quiet Place Part II” drives home why we need the cinematic experience as from the large screen to the Dolby Atmos sound; the film is a sensory experience that needs to be enjoyed in a communal setting with maximum sensory input. The film sets the tension meter to the max and never disappoints and I urge you to experience this film the way it was intended. 4.5 stars out of 5

Not gonna say more but a worthy sequel and gives same or some might say more goosebumps than prequel but amazing work by jhon krasinski and new cinematography director etc .overall good cinematography, visuals etc was interesting. I enjoyed it and would love a sequel. Personal rating 8 .thank you.

It’s not bad but really when you take a look at it from the no hype perspective it’s basically a few action scenes and not much else. It’s short changing the audience in arc replacing it with an average plot. It’s not terrible and everyone is great in it. It’s just the actual story is very vacuous and that disappoints.

Good, not great, follow up. Some good suspense-filled scenes and solid emotive performances since there's not a whole lot of dialogue. The first one was better as a whole but this is a worthwhile sequel, simplistic which is a plus, no unnecessary drama on the human side. Don't know if I'll revisit it anytime soon but as a one-off viewing, it works well enough. **3.5/5**

Once thing that is constantly pointed out as a pain point of horror/suspense movies is a either a character doing something highly illogical or plain dumb to create drama and/or further the story....AQP1 refreshing did not suffer from this, it was more of a series of bad events that built upon each other and that allowed it to keep the creepy tone it was trying to cultivate.AQP2 however is driven by these type of things and it's what honestly makes the movie so difficult to watch.The most glaring example is the actions of the children, the son's actions being slightly kore egregious then the daughters.The son, after getting his leg clamped down by a bear trap (in so much pain he openly screams out knowing it could lead to his death)... decides to investigate their living situation in the warehouse when his mom leaves to get supplies...also leaving him in charge of watching the baby.This action is so absolutely idiotic I can't even imagine a child would engage in it. His leg/ankle was just destroyed by a bear trap, he has been tasked with watching his little brother and on top of all that throughout both movies he's shown that he is generally pretty scared at the idea of these creatures and only desire to be brave when it's out of necessity... despite ALL OF THIS, he goes against physical pain, his defined personality, common sense and task of watching the baby to go investigate his surrounds... for literally no reason. Of course on cue he sees a dead person behind a curtain, makes a lot of noise and attracts the aliens... this one just made so little sense on so many levels.Also the mother not expressing saying, "hey this tank is almost out of air, don't put your sibling in the box just in case I can't find any air or don't come back" or something along those lines feels like an obvious miss.Then the daughter, deaf deciding to go out on her own and investigate the radio signal. Despite the obviousness that she is single handedly the worst person for this (as she cannot hear any noise she may be making) at least it was set-up in the previous movie that "stubborn" and "believes she can do anything" is right in her wheel house... so at least that tracked.Other non-logical things like "rouge bandits" setting up elaborate traps, made very little sense in this type of post-apocalyptic atmosphere. Every person you rob is essentially a time-bomb that can kill everyone by making a bunch of noise (as what obviously was foreshadowed and happened) is it worth robbing a random person out in the world of everything they have (which if they are caring stuff probably isn't much), leaving them with nothing and a reason to just say "screw it" and start screaming?The risk to reward seems flimsy and the thought of roving bandits seems illogical in this type of post apocalyptic world. Also, say they weren't roving and were living around the docks... they never had a situation where one of the monsters fell in the water? They never saw the fires at night on the island? Again, just didn't make a ton of sense.There were little things here and there as well like:1). The close-ups of them wearing no shoes to keep noise down, emphasizing just how important it was... to then everyone else is running around in shoes/boots.2). The "hidden" message of beyond the sea playing over and over... why not just record a message in a loop saying exactly what you mean? Are you worried the aliens are going to hear that but not have the mental fortitude to decipher your sneaky song based message? Like who are you trying to poorly code this for?!?3). The daughter trying (in a train filled with dead people) to push against a stuck door for a first aid kit, which was obviously building to a jump scare where she would make noise (it was a dead person behind the door, who would have guessed?!)4). The car scene on the island where they lure the monster far away from the base, but then Djimon Hounsou starts believing that for some reason the monster just ran away and stands with his back to a half-open garage door, speaking at full volume about how he needs to "get back" and is obviously killed.All of these dumb decisions to drive action just ruined the surprise/creepy ambiance and made the movie painfully predictable and boring.Lastly the scene near the end where the daughter kills one of the monsters, she makes a bashing motion (like bashing over the head) instead of a stabbing motion with her metal pole, but then pulls it out of the monster as if she had stabbed it... that bugged me.The best part of this movie was the beginning, showing how it happened and that was honestly far too short and not detailed enough.

.......and if you enjoyed the first one then you'll certainly enjoy this one too.Most sequels that flop tend to do so because the powers that be think the audience simply want exponentially more of the same thing that was in the original. More bad guys, more explosions, much, much more of everything. Except story and depth and character development.A Quiet Place II, thankfully, doesn't fall into that trap. It starts almost exactly where it left off. Right at the point in fact, where we were left wanting to see more in the first film. Then it simply and effectively expands on the original.Overall I rate it as good as the first instalment, if not marginally better in places. If it has any fault at all, it's in the runtime which, IMHO, is a tad short. We definitely wanted to see more though and who knows, maybe there'll be a third one? Let's hope so.