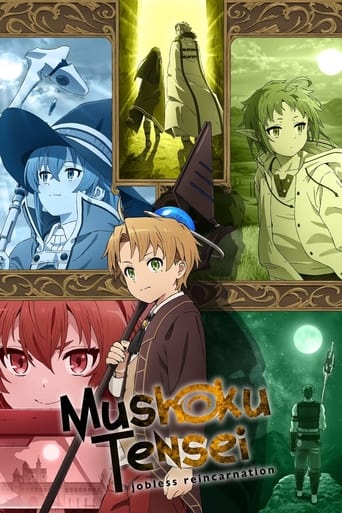 34-year-old virgin loser is kicked out of his home by his family and realized that his life is completely over. As he regrets wasting his life, a truck runs him over and he died. When he wakes up... He’s in a world of sword and sorcery! Reborn as a baby named Rudeus, he decides that this time, he’ll live a life he won’t regret!

When a 34-year-old underachiever gets run over by a bus, his story doesn’t end there. Reincarnated in a new world as an infant, Rudeus will seize every opportunity to live the life he’s always wanted. Armed with new friends, some freshly acquired magical abilities, and the courage to do the things he’s always dreamed of, he’s embarking on an epic adventure—with all of his past experience intact!

EP 4 Made honorifics track not default ```

All my encodes are made from Japanese BDMV's unless specified otherwise. You can expect my encodes to be as close to the BDMV as possible while reducing the file size to several times smaller. Other than some exceptions I do not use AA, blur, denoise, etc. (reasoning).

If you run into any issues feel free to leave a comment. If I feel like it I will help you out.